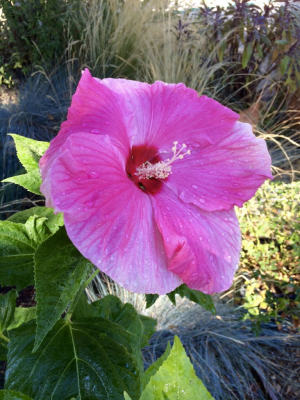 Sara Rohrer Peterson died peacefully Nov. 17, 2019, in her Sonoma residence, with her daughters at her side. She was 93.

She was born Sara Louise Rohrer on Aug. 23, 1926, to Sara Grove Rohrer and Robert Augustus Barr Rohrer in Lancaster, Pennsylvania. Known as Sally, she attended James Buchanan School until 6th grade, and then Shippen/Lancaster Country Day through high school.

Entering Vassar College in 1944, Sally graduated in 1947, (Class of ’48) with a BA in Zoology. An enthusiastic supporter of athletics, she competed on both the school’s field hockey and lacrosse teams.

Upon graduation, she moved to Long Island, New York, having accepted a position as a research assistant at the Carnegie Institute, also known as the Long Island Biological Laboratory, in Cold Spring Harbor. It was an early hub of life sciences exploration, especially in genetics research. Working in the Bruce Wallace Lab, she met another young scientist, Peter A. Peterson, whom she’d marry in 1948.

Sally and Peter moved in 1949 to the University of Illinois, Champaign-Urbana campus, where they both began graduate studies. Sally was also a Teaching Assistant in the Biology Dept. and received her Masters Degree in Botany. During their time in Champaign, their two daughters, Sara and Susan, were born.

The family of four moved to California, where Peter was a geneticist at the University of California Riverside’s Citrus Experiment Station.

In 1956, the family moved to Ames, Iowa. Sally subsequently began work with the Iowa State University Film Production Unit to develop single concept films on plant anatomy and physiology. Peter took a faculty position in the Agronomy Department, where his genetics research focused on corn as a medium for the study of the mechanics of heredity via generational trait transfer.

After living in Sweden in 1968 while Peter was on sabbatical at the Karolinska Institute, Sally returned to school, in the University of Iowa’s Library Science Graduate Program in Iowa City, receiving her second Masters’ Degree.

She then accepted the position of Director of the Veterinary Medical Library at Iowa State. In that role, she actively assisted both faculty and students until she retired. As she was hired during the design & construction of the new Veterinary Medicine Campus, she helped define the goals of the new facility, and curated the collection, ranging from Biology and Biochemistry to Veterinary and Comparative Medicine. She also established the strategy for automated retrieval.

Active with the Medical Library Association, she helped establish the Veterinary Medical Libraries Group within it, serving as chair. Sally was engaged in the Ames community in many ways, including Play Makers, PTA and Fortnightly. She was a fan of gardening, nature walks, swimming and cross-country skiing.

She and Peter traveled extensively, both nationally and internationally, visiting many scientific institutions and universities for their research. Upon Peter’s retirement in 2013, they moved to Sonoma, California, to be near their daughters, Sara, a lawyer, and Susan, an architect.

Sally lived a long and healthy life. She is pre-deceased by Peter (2017) and is survived by her daughters, Sara Peterson of Sonoma and San Francisco, and Susan Peterson St. Francis of Sonoma; Susan’s husband, Raymond St. Francis; and their two sons, Adrian and Theo St. Francis. The family mailing address is P. O. Box 1446, Sonoma, CA 95476

In lieu of flowers, donations may be made to Hospice by the Bay, 17 East Sir Francis Drake Boulevard, Larkspur, CA 94939. (hospicebythebay.org)

To send flowers to the family or plant a tree in memory of Sally Peterson, please visit our floral store.

You can still show your support by sending flowers directly to the family, or by planting a memorial tree in the memory of Sally Peterson