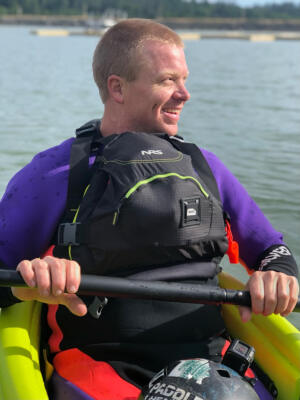 In lieu of flowers, please consider making a donation to the local non-profit public radio station where Rob had a weekly broadcast, "The Dub Shack," at KSVY, 680 West Napa Street, Sonoma, CA 95476.

Rob was a Renaissance Man. He was a ski instructor, raft guide, wine bottling facility technician, DJ, and talented artist, specializing in photography and refurbishing old bikes. He was involved in the salvage industry and most recently started his own company, Valley of the Moon Handyman.

Rob was known for his big heart, big laughs, and joyful disposition. He had the kindest demeanor, and was willing to help anyone. As a child, his nickname was “Smiley” because he was always happy.  Rob, affectionately later known by his friends and family as Rah Rah touched many lives and will be sorely missed by his parents, Jane and Kris, his brother John Gallagher (Lauren), his sister Sarah Gallagher Parker (Chris), his niece Munai, and nephews Cael, Max, and Bodhi, as well as his beautiful long-time girlfriend, Amanda Sewall, and countless other friends and family.

In lieu of flowers, please consider making a donation to the local non-profit public radio station where Rob had a weekly broadcast, "The Dub Shack," at KSVY, 680 West Napa Street, Sonoma, CA 95476.

To send flowers to the family or plant a tree in memory of Robert Stephen Gallagher, please visit our floral store.

A Memorial Tree was planted for Robert