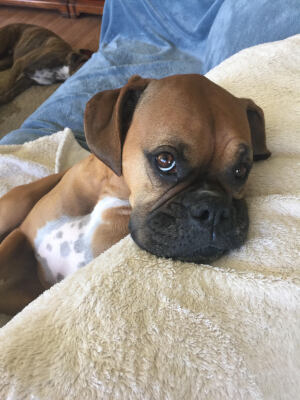 Kaitlyn Ryan Hanna, age 29, passed-away peacefully at home, in the loving embrace of her mother, father, and brother on June 2, 2020, after a long and courageous battle against stage IV breast cancer. Born February 23, 1991, Kaitlyn had a true love for life and was known to be feisty and tenacious, with a spirited sense of humor, an unforgettable smile, and an infectious laugh. Everyone who met her could not help but be drawn in by her gregarious nature.

Born and raised on Burndale Road in the Sonoma Valley, Kaitlyns love for animals was nurtured at a young age and continued into her adulthood, when she worked at East San Rafael Veterinarian Clinic before she was diagnosed in 2015. Charlie, Kaitlyns boxer, was Kaitlyn's best friend and confidant, and through a twist of fate passed suddenly two days before Kaitlyn. We are comforted by the thought that the two of them are reunited and able to take runs as often as they like, as that was another passion of Kaitlyns. She was a true fighter at heart, and staying physically fit helped Kaitlyn stay mentally fit, and despite chemotherapy and radiation therapy you could often find Kaitlyn on a run with her two boxers, in a yoga or Pilates studio, or at spin class. Additionally, Kaitlyn, while accompanied by some of her closest friends and family, took part in Tour De Pink, a 200-mile three-day bicycle ride to help raise awareness and support for young adults diagnosed with breast cancer.

Throughout her fight, Kaitlyns closest friends and family made long and regular trips to help her through her toughest moments. But when she was feeling well she didn't waste a second. She took advantage of the good times and traveled with her girlfriends and family all over the world. Some of her favorite places were Thailand, Hawaii, Mexico, Canada, the Grand Canyon, and Zion national park. When she wasn't on the road Kaitlyn spent every spare moment with her beloved nephew, Levi. Levi adored his Auntie "KK", and he was Kaitlyns greatest motivator in staying in the fight against cancer.

In lieu of flowers, Kaitlyns family asks that donations be made to an animal charity of your choice, METAvivor, Marin Cancer Clinic, or Hospice by the Bay. A Celebration of Life will be scheduled once the current social distancing orders are lifted.

To send flowers to the family or plant a tree in memory of Kaitlyn Ryan Hanna, please visit our floral store.

Services are to be announced