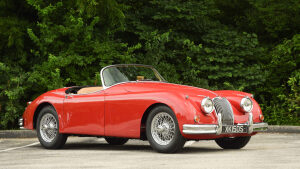 Jack A. Lutzow (age 92), artist, illustrator, and graphic designer passed away quietly at his home in Sonoma, CA on August 27 with his wife and daughter by his side.  Born and raised in Chicago, Jack studied portrait painting with Sir Pierre Nuyttens and illustration and graphic arts at the Institute of Design and the American Academy of Art in Chicago.  Jack’s artistic career spanned more than 70 years, both in Chicago and San Francisco.  Jack was passionate about his art, particularly his watercolors, and felt his life as an artist truly defined his identity.

Jack was a man of many interests. In addition to his art, Jack was a talented cook, loved working outdoors, swimming, dancing, attending live theater, and vacationing in warm places, especially Palm Springs and Mexico.  In his younger years, Jack was an amateur race car driver and later enjoyed restoring old cars, with his favorite being his 1958 red Jaguar XK150.  He was a member of the Valley of the Moon Art Association, the U.S Air Force Art Program (which included several trips to Washington, DC where his paintings were on display), and was a volunteer with Vintage House and the Sonoma International Film Festival.

Jack will be greatly missed.  He is survived by his loving wife of 42 years, Louise Noble, and he was the proud father of five children from his first marriage to Mary Louise Muir (deceased): Gregory Lutzow (Marie), David Lutzow-deceased (Eileen), Candace Lutzow Felling (Patrick), Dewey Lutzow (Chrissy), and Michael Lutzow.  He is also survived by his sister, Linda Meyer, his two brothers, Robert Lutzow and Eugene Katz, 9 grandchildren, and one great grandchild.

As a result of the North Bay fires of 2017, Jack was devastated by the loss of his home, art studio, and a lifetime of paintings.  As part of the healing process, Jack slowly began to create many new beautiful watercolor paintings which then graced the walls of his new home in Sonoma.  The family is planning a private service for Jack.

To send flowers to the family or plant a tree in memory of Jack Alexander Lutzow, please visit our floral store.

You can still show your support by sending flowers directly to the family, or by planting a memorial tree in the memory of Jack Alexander Lutzow
Share a memory
© 2021 Duggan's Mission Chapel. All Rights Reserved. Funeral Home website by CFS & TA | Terms of Use | Privacy Policy