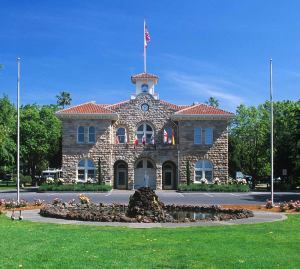 (Note: In June of 2017 at the age of 92, my longtime friend and fellow Sonoman, Helen Fernandez, requested that I help her write her obituary in advance. Helen was, when we spoke, one of the last surviving Sonomans of America’s greatest generation, and a great Sonoman and American she was. I didn’t need to research the highlights of her life, I lived through many of them and she filled in the blanks. Bill Lynch, Editor and Publisher Emeritus, The Sonoma Index-Tribune).

“I love living here in Sonoma Valley. There are so many opportunities to do good things for our community. And when you do, you meet and become friends with people you wouldn’t otherwise meet. It’s such a wonderful place,” Helen Fernandez said reflecting back on her 60 years in Sonoma Valley.

Born Helen Maria Blomberg, March 23, 1925, in San Francisco, she spent her entire childhood in the city. She graduated from Commerce High School on Van Ness Street just a few months after the outbreak of World War II. During the war, while working for Standard Oil, she joined United Service Organizations (USO) as a volunteer and organized a group of women to raise money and support the troops.

Even as a teenager, more than a decade before she came to Sonoma Valley, Helen saw opportunities to serve and had developed a talent for enlisting others to participate. It was also during that era that she met Barney Fernandez, whose family lived in her neighborhood. Barney was a year ahead of her in school and went to work for American President Lines (a merchant marine company) after his graduation from Polytechnic High School in San Francisco. They courted during the war years. Barney also served in the United States Naval Reserve. Helen said she told him that they couldn’t get married until he returned to school to earn his navigator’s license (officer’s commission). He did and they got married in 1947. Barney returned to American President Lines as an officer continuing his 44 year career with APL. Their son Barney Jr., was born in 1947, followed five years later by son Bill. With the war’s end, Helen continued to find ways to serve, this time as a volunteer for the San Francisco Boys Club. It wasn’t long before she was on the club’s board of directors and eventually became board president. By 1957, Helen, a seasoned volunteer, agreed to open the San Francisco Boys Club’s first summer camp in Sonoma Valley on property owned by Judge William P. Downey at Cragmont just off Mountain Avenue in Agua Caliente. She and her mother, Ester, moved onto the property and ran the camp all summer. Helen fell in love with Sonoma Valley and never left. She and Barney, now a career officer with APL, and sons Barney Jr. and Bill, purchased a home on Second Street West, and became permanent residents. The same year, Helen opened the Sweet Tooth café on West Napa Street directly across from the Sonoma Index-Tribune. It evolved from a candy store to a coffee and lunch shop. Simultaneously, Helen became involved with the Sonoma Valley Chamber of Commerce. Her ability to identify worthy community causes and then recruit others to join her quickly transformed Helen’s Sweet Tooth into what many called “little city hall.” It seemed that she knew everyone in town and everything that was going on in it. The I-T news editor, Jerry Parker, used to joke that when it was a slow news day, he’d walk across the street and ask Helen what was going on. In the spring of 1962 even as Helen was intensely involved with the Chamber of Commerce, she became one of the founders of Sonoma Valley’s Boys Club. She, along with Dr. C.B. Andrews, Jerry Casson, Henri Maysonnave, George Marlowe, Judge A.R. Grinstead and a dozen other local residents agreed to form a board of directors for what was to be called the Valley of the Moon Boys Club. It’s first home would be the Community Center. From that day forward, Helen remained a major volunteer, supporter and leader of the club, which evolved into today’s highly successful Sonoma Valley Boys and Girls Club. She also stayed involved with the Chamber, eventually serving 12 years as its executive director. She was active in the Soroptimist Club, serving a term as president, was Sonoma Valley’s representative on United Way, contributed her leadership to the City of Sonoma disaster preparedness task force and raised money for the Veterans Improvement Project. Helen was instrumental in raising money necessary to move the growing Boys Club from the Community Center to large quarters at the former Hy-Lond Laundry on First Street West. While serving on the board, Helen established the first Sweetheart Auction and dinner, which has been the club’s signature fund-raising event ever since. She also came up with the idea of naming a community member as the club’s sweetheart each year. Sadly, in 1985, just a year after he retired from his service as an officer and navigator for American President Lines, Barney Fernandez passed away. Helen carried on as a community leader and volunteer. She helped lead the multi-year effort to raise funds to build the current Boys and Girls Club building at Maxwell Park, working alongside community leaders like Bob Stone, Gary Nelson, Al Mazza, Fran Meininger, and many others. Ground was broken in 1988 and by January 2000, the new club building was completed and enough capital had been raised that it was debt free. Helen continued to be an active volunteer for the club for another decade. In 1998, she was named Honorary Alcaldesa by the city of Sonoma in recognition of her decades of service to her fellow Sonomans. A few years later, at the age of 85, she suffered a fractured hip and elbow and had to spend more than a month in Sonoma Valley Hospital’s skilled nursing wing, referred to as “the SNIFF Unit.” While the injury kept Helen from joining her friends on their long daily exercise walks around the town (they named themselves the “Sonoma Streetwalkers”), it didn’t keep her from being proactive. Not one to rest on her laurels, or a broken hip, Helen announced from her hospital bed that she was going to do something about the drab and dreary décor in those SNIFF rooms. Once out of the hospital, she teamed up with Suzanne Brangham, another innovative and energetic leader in community causes. They planned and raised money for a cheerful refurbishing of the SNIFF rooms, including new beds, TV’s, fresh bright colors on the walls and ceiling and other décor. Together, they got many locals to donate $10,000 to sponsor an entire room. Those rooms are much brighter and welcoming today thanks to Helen. Her work on behalf of our hospital, the Boys and Girls Club and Chamber of Commerce are the efforts that brought her the greatest satisfaction. “I’ve had the opportunity to give and that is my joy.”

There are no Sonoma monuments or buildings in her name, perhaps because there are so many possibilities. In her 60 plus years here, Helen Fernandez was both ecumenical and irrepressible in her support of the community she loved so much. Locals faced with a task to raise money for a worthy cause knew they could ask Helen for help and she’d say yes. There were years when it seemed she was everywhere doing everything. Through her generosity, energy and kindness, she built a monument in the hearts of those of us fortunate enough to have known her.

For all she has accomplished for others during her rich and productive life here; for her kindness, consideration and generosity, Helen will always be Sonoma Valley’s best-ever Sweetheart.

To send flowers to the family or plant a tree in memory of Helen Mary Fernandez, please visit our floral store.

You can still show your support by sending flowers directly to the family, or by planting a memorial tree in the memory of Helen Mary Fernandez
Share a memory
© 2021 Duggan's Mission Chapel. All Rights Reserved. Funeral Home website by CFS & TA | Terms of Use | Privacy Policy