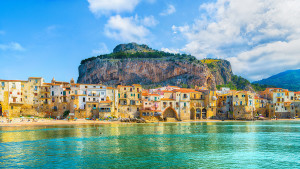 Mary’s family emigrated from Augusta, Sicily coming through Ellis Island and started their lives in America in New York.  Her family then moved to Detroit and soon afterwards moved to North Beach in San Francisco.  Here, Mary was able to enjoy and nurture her Italian heritage, which was the foundation of her life. She passed on her love of Italian traditions and cooking to her children and grandchildren.  She attended Galileo High School and after high school she worked in a garment factory, and met the love her life, Maurice “Tres” Tresmontan. They were married for 58 years before his passing in 2007.

Her greatest passion was spending time with her family and friends.  She always enjoyed cooking for all who came to her home.  She was an active member of St. Gabriel’s Parish in San Francisco, where she volunteered with the Italian Catholic Federation and socialized with her many friends. In her later life, she learned how to golf, and enjoyed many golf trips with her 39th Avenue group. In 1983, Mary and Tres decided to make Sonoma, CA their permanent home and continued to expand their circle of wonderful friends.

Preceded by her parents Luciano and Carmela Pugliaresi, and five siblings: Rose, Sarafina, Natalie, John, and Josephine.  Mary is survived by many nieces and nephews, as well as many others who called her Noni.

To send flowers to the family or plant a tree in memory of Mary Carmela Tresmontan, please visit our floral store.