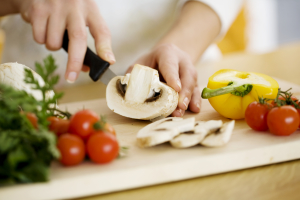 Josephine was born in Vallejo CA on November 7, 1919 and left this earth on June 1, 2019 - 5 months short of her 100th birthday.  Her parents, Giuseppe and Giuseppina Noli, were of Italian heritage and her father supported the family through an extensive vegetable garden.  Josephine lived in Vallejo until her 12th birthday, at which time she, her sister Dorothy and her parents moved to Sonoma.  She competed her grammar school education in Sonoma at the Old Grammar School and graduated from Sonoma Valley High School in 1937.  She was employed by many businesses in Sonoma, including the Toscano Hotel where her mother was the cook.  Josephine worked in the kitchen with her mother and became skilled in making ravioli, which accompanied dinner.  In 1940 she married Tony Morenzoni and began a career as a homemaker while also working outside of the home.  She was a skilled cook and was proficient in producing the Italian cuisine which she preferred above all others. For many years she was a fixture in the Sonoma French Bakery as well as several dental offices in Sonoma.  Tony passed in 1999 and from then on she was known as the lady with the manicured home and landscape.  After Tony died, she joined the Sonoma Valley Hospital Auxiliary and was very active in all of its functions for many years. She was many things to many people, but above all she was a valued confidant, a competent advisor and was extremely proud to be a long time resident of Sonoma.

Josephine is survived by her son and daughter-in-law (Rich and Dana), and her grandson (Matt) and his wife (Naomi) and their daughter (Emilia).

A Rosary will be conducted at Duggan's Mission Chapel at 4 pm on June 9, 2019.  A funeral mass will be celebrated at Saint Francis Solano Church at 11 am on June 10, 2019 followed by interment at the Sonoma Mountain Cemetery.

To send flowers to the family or plant a tree in memory of Josephine Emily Morenzoni, please visit our floral store.