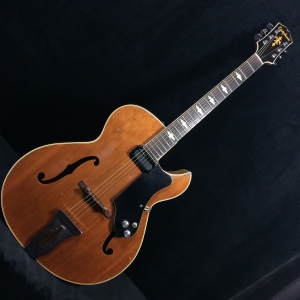 In the 1950s, the jazz giant Charlie “Bird” Parker came to San Francisco for a series of concerts. The bebop sax genius had his pick of local sidemen and picked Eddie Duran, a Mexican American who had taught himself to play Latin jazz on guitar in order to join a family combo.

That stint with Bird solidified Duran as a go-to guitarist and he ended up performing and recording with saxmen Stan Getz and Paul Desmond, and pianists George Shearing and Vince Guaraldi. Benny Goodman brought him on an international tour that included three shows at Carnegie Hall, with Duran singled off the bandstand to play a solo.

Duran, who also recorded five solo albums in a career that lasted 70 years, died Friday, Nov. 22, at his home in Sonoma in the company of his three favorite guitars, said his wife Madaline Duran. He was 94.

At 5-feet 6-inches tops, Duran could look tiny behind a guitar. But he had stage presence as the longtime bandleader at the famed hungry i and a TV regular on the morning “Al (Jazzbeau) Collins Show.”  Duran had perfect technique and impeccable time as a rhythm player, and was sensitive to melody while also improvising.

“I was always amazed at how beautifully he could accompany people, whether it be vocalists or horn players,” said Dick Conte, the pianist and longtime DJ at KCSM Jazz 91, the last jazz station in the Bay Area. “He had a great ability to listen and know where someone was going musically, and he’d go right along with them.”

Edward Lozano Duran was born Sept. 6, 1925, into a musical family among six siblings. His parents, Fernando and Emma, were immigrants from Veracruz who did not speak English. Fernando Duran found work as a cigar maker in North Beach, but the family was so poor that Duran, the youngest, was once hospitalized with malnutrition.

Tired of their diet of coffee and bread, the children all learned instruments to perform behind the only daughter, Celia, who sang and danced. Duran was assigned the guitar and learned to play by listening to Django Reinhardt records on the family Victrola. The Durans played sets after movies in the big downtown theaters. They also entered and won a major radio “Amateur Hour” competition, in 1938, when Duran was 13 years old.

Two years later, Duran dropped out of Mission High School to play music full time. He played the Copacabana, Chez Paree, Streets of Paris, and Tin Pan Alley among clubs in North Beach and the Tenderloin. It was going well until he was drafted, and joined the U.S. Navy.

After his hitch was up, he returned to San Francisco and attended barber college. He met and married another native San Franciscan, Arlene Wolf, who played piano and sang under the stage name Arlene Hart. His brother-in-law, Andy Lackbay, was a celebrity barber with a salon named Original Andy’s, and Duran went to work there.

But the Duran brothers — Carlos, Manny and Eddie — were still performing. Pianist Vince Guaraldi (of “Charlie Brown Christmas” fame) recruited him for a trio with Dean Reilly on bass. In 1955, the Vince Guaraldi Trio became the house band at the hungry i. The brothers opened the show and played intros for comedians like Mort Sahl and Jonathan Winters.

Ever in demand, Duran also played in the Cal Tjader’s Mambo Quintet, and in the New York band of Shearing.

“Eddie’s guitar playing was very soulful,” said Reilly, who played in Duran’s own trio on the album “Ginza,” and on “Let there be Love” with Getz and vocalist Dee Bell.

Duran played with Pearl Bailey and with Vernon Alley; he played with anybody and at any hour, often at the famous jazz clubs the Blackhawk, Facks II and Jimbo’s Bob City, where the booze was poured into coffee cups and the jam session would go until daylight.

Duran’s first wife, Arlene Wolf, died of cancer in 1976. Five years later, Duran was headlining the 1981 Cotati Jazz Festival when he met Madaline Askew, an aspiring sax player. They were married after two years and lived for many more years in Duran’s apartment off Russell Street on Russian Hill. They performed together as Mad & Eddie Duran.

Duran also performed as a duo with his oldest daughter, pianist Sharman Duran, often at the now-defunct Moose’s restaurant on Washington Square. He even performed in a trio with both his daughters, including Pilar Duran, a jazz guitarist who lives in Mendocino County.

“He was one of the last representatives of West Coast Jazz,” said Sharman. “He lived and breathed playing guitar, and he was a great personality.”

His daughters survive him as does a son, Joel Duran of San Mateo. A musical tribute to Duran is being planned at a venue to be named.

To send flowers to the family or plant a tree in memory of Edward Lozano Duran, please visit our floral store.

You can still show your support by sending flowers directly to the family, or by planting a memorial tree in the memory of Edward Lozano Duran
Share a memory
© 2020 Duggan's Mission Chapel. All Rights Reserved. Funeral Home website by CFS