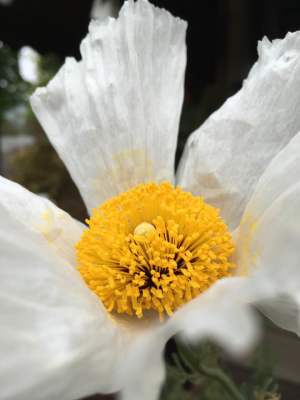 Cynthia Marguerite Mennie was born in Seattle, Washington, to parents who thought they were done having children.  The youngest of five, she quickly became the apple of both of her parents’ eyes.  She grew up in Port Angeles and Seattle, and was a fierce tomboy.  She liked to call herself “Tex,” and wore her cowboy boots to bed, much to the chagrin of her older sister, Claudia, who shared the bed with her!  She “collected” pets wherever she went, from dogs to ducks - she loved all animals.  Cindy attended Evergreen High School in White Center, where she was active in the drama department and made many lasting friendships.  She graduated in 1966, and was voted Nicest Student by her classmates.

From Sister Maureen Hilliard: Directly after high school “she entered a life of commitment to living the Gospel as a Sister of Notre Dame de Namur.  In her ministry life as an elementary school teacher and then as the Campus Minister at Notre Dame de Namur University (her undergraduate alma mater), Cindy embodied many characteristics of the Sisters’ foundress, St. Julie Billiart: her goodness to others, her joyous presence to students (who loved her), to parents, faculty, and with her SND sisters; and her growing sense of social justice for all, in particular the equality of women and men.  Cindy indeed advocated for, and advanced the active participation role of all Catholic parish members within the life of Catholic church ministry, and decision-making.”

After 15 years as a nun, Cindy made the difficult decision to leave the Sisters of Notre Dame to write the next chapter of her life; although she remained very close to her fellow sisters for the rest of her life.  In 1981 she was introduced to her future husband, Dan Vrooman, by a co-worker who was a friend of Dan’s mother.  They had their first date on October 22, 1981.  Dan recalls that the moment he met her he felt like he had known her forever.  Cindy must have been smitten too, because the two were wed less than a year after that first rendezvous, in August 1982 in Belmont, California.  They started their married life in a little cottage in Mendocino, and purchased their first home soon after in the neighboring town of Fort Bragg.

They welcomed their first daughter, Katie Eileen, in September of 1983 and their second, Piper Frances, in November 1985.  Cindy was a marvelous mother from the very start, taking her daughters on near-daily visits to the beach and outings all over the northern coast.  Although they enjoyed Mendocino County, Dan and Cindy decided that they did not want to raise their daughters in that remote region of Northern California.  After falling in love with the beautiful town of Sonoma, they moved their family there in 1988.

Cindy quickly became an active member of the community through teaching and involvement at the local church, St. Leo’s.  In 1992 she took a position at the church as the Director of Religious Education.  She had a strong passion for the role, and met some very dear friends over the 15 years that she was there, including the late Monsignor Jack O’Hare, who meant the world to her.

While she enjoyed her work, she shone most brightly as a mother – injecting fun and humor into everything for her girls. Cindy carted her daughters and all of their friends around the greater Bay Area on countless memorable adventures, and she maintained the spirit of teaching by coaching them all for the Oral Language Fair, putting together readers’ theater groups, and giving much of her time and attention to homework assignments.  As such, most afternoons the Vrooman house was full of giggling girls, all relying on Cindy to provide the best advice, best snacks, most patience, greatest acceptance and zero BS.

From Dan: “Cindy was one of the great amplifiers of the unlived life.  I could always count on her to relentlessly illuminate everything longing for wholeness within me - not because she had some agenda to do so, but simply by the nature of the crucible that forms when we allow another to truly matter to us.”

Once her girls were grown, she embarked on another teaching adventure, this time as an instructor of speech and rhetoric at Dominican University of California.  The role reinvigorated her joy for being in the classroom, and she adored her students.  They felt the same way about her, many saying that she gave them confidence and cured them of their fear of public speaking.  Around the same time, she proudly returned to Notre Dame de Namur University as a representative of the Sisters on the Board of Trustees.

She found her greatest joy as a grandmother, when her first grandchild, Giovanni, came into the world in June of 2006.  She was thrilled to have a boy in the family, and she nurtured him as if he were her own son.  She said more than once that being a grandma was even more wonderful than being a mom.  She continued to emphasize this as her granddaughters, Claudia and Edith were born (in 2012 & 2016 respectively), giving them far more ice cream than she ever would have allowed her own kids!  And, she was very happy to see Giovanni become a big brother, when Rosalind was born in September of 2017.  She was the best grandma, and it is heartbreaking that her grandkids will not have more time with her.

Cindy never gave up the cause of social justice. As a visionary and activist, she saw a way to make the world a better place, and continued to fight for the ideals of the under-represented, from starting the Emmaus Community in 2007 to protesting on behalf of Leadership Council For Women Religious.  She was honored to join her friend, the late Elizabeth Kemp, in her efforts to feed and house the homeless community of Sonoma.  She succeeded Elizabeth as the President of the Board of Sonoma Overnight Support, and worked tirelessly to bring to light the needs of the homeless in Sonoma.

Cindy had a life well-lived, but cut too short.  The world is a little less bright and far less funny in her absence.

She was preceded in death by her parents, Ralph and Elta Mennie, her brother Ralph (Bob), her sisters, Claudia and Veronica, her beloved niece, Stacie, and nephew, Sean.  She is survived by her sister, Rae Curtis, her husband, Daniel James Vrooman, her daughters, Katie Eileen Barr and Piper Frances Sandoval, a number of dear nieces and nephews, and her favorite people in the world - her grandkids: Giovanni Tyler Sandoval, Claudia Ann Barr, Edith Charlotte Barr, and Rosalind Leigh Edwards.

In lieu of gifts or flowers, Cindy’s family invites you to make a donation to Sonoma Overnight Support  or to the Sisters of Notre Dame de Namur.

To send flowers to the family or plant a tree in memory of Cynthia M. Vrooman, please visit our floral store.