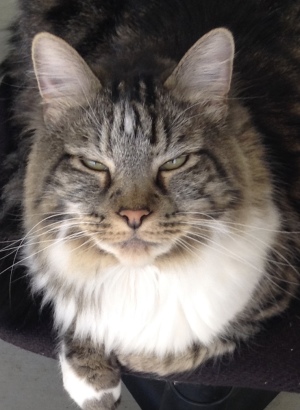 Alice Elizabeth (Andersen) Mammini was born October 10, 1942 in Oakland, CA to parents Robert and Mary Andersen.  In her younger years she lived in Oakland, as well as in Atwater, Hawaii, Napa and Morgan Hill.

She was married to James Mammini (1964-1975) and settled in San Martin on his family’s farm.  It was there she raised her two daughters.  It was a challenging time for Alice, but she loved her daughters with all her heart and they remained a focus throughout her life.

Alice moved to Sonoma later in life to be closer to her daughters.  She eventually settled into her beloved apartment in Petaluma, where she established numerous friendships and enjoyed her local community.

She enjoyed knitting, crochet, card making, crafts, hanging out with her kitty and spending time with friends and family.  She was always working the angles—she had a ton of spunk and a strong will.  If she wanted something, she usually found a way to get it.

She passed away in the hospital surrounded by love—her daughters and sister Julianna holding her hands.  She is free now from pain, after years of suffering and multiple illnesses.  Her spirit will live on in us and in the universe.

She is survived by her daughters Jeannette Tomany and Michelle Mammini and their spouses Frank Tomany and Bradd Savage.  She will be sorely missed by her grandsons Sean Tomany, Jack Savage and Max Savage.  She is also survived by her two loving sisters; Julianna Andersen and Patricia Ashauer, plus numerous cousins and relatives.  She was also particularly close to cousins Lisa Colarusso and Alei Zavaleta.  She leaves behind her oldest childhood friend, Roberta Tracey of Napa.

A few people made her life better in so many ways.  She was extremely close to caregiver Carol Gonzales and Ciky Garcia of IHSS.  She also had a unique and special bond with her doctor, Dr. Hameed of Petaluma Health Center.  The family cannot thank them enough for their care and their love.

A Celebration of Life will take place at the Tomany home on September 15 with a potluck at 11am.  Please contact Jeannette at 707-480-3523 for more information.